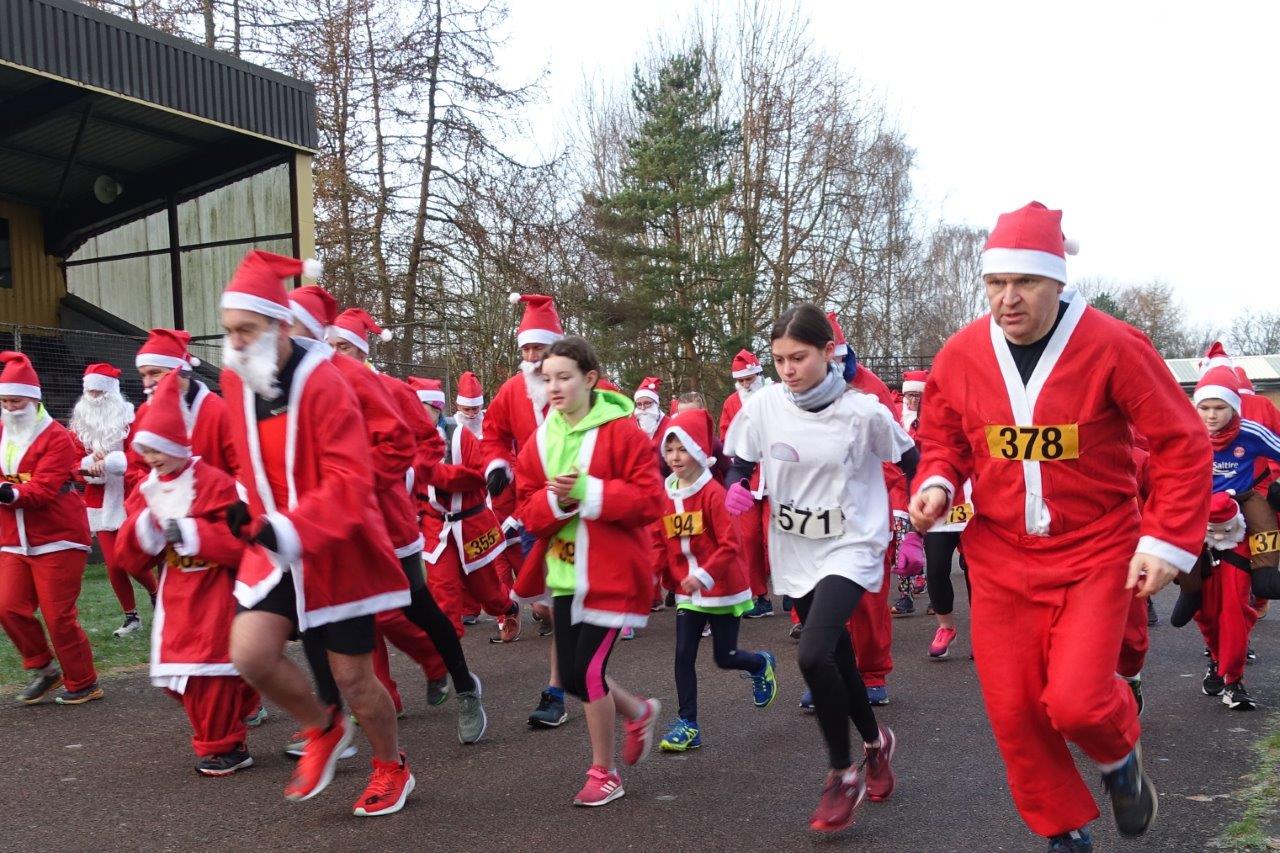 When Sunday 12th December dawned crisp and cold, over 80 ‘Santas’ gathered at the Grampian Transport Museum in Alford to take part in the Athletics Trust Scotland’s inaugural 5k Santa Dash. Organised by the charity’s Fundraising Manager, local ultra-runner Kyle Greig, funds were raised to help up and coming athletes to progress towards achieving their full potential. There was a sea of red and white waiting for the off but with one special exception. Premnay teenager Rhian Birnie was wearing a very special ‘Run4marie’ T-shirt which had belonged to her friend and mentor, Newmacher running enthusiast Marie Dobson, who sadly lost her fight against secondary breast cancer earlier in the week. Marie had been organising ‘Run4Marie’ events since 2019 to raise funds for a special cancer treatment not available on the NHS.

Just prior to the Santa dash setting off, Race Director Kyle said a few words about Marie, acknowledging her lifelong love of running, and there was a warm round of applause in her memory.

It was very fitting, therefore, that at the end of the fun run Rhian was the first female finisher in a time of 24:01, and was very proud of her medal for the event (pictured). Our first male finisher was local runner Eric Clark who whizzed his way round the multi terrain route in 21:22.

Kyle was delighted with the turnout of what he hopes will become an annual event “It was cold this morning but that didn’t deter either our little ‘elves’, who ran their own 1 mile race round the museum’s 1/4mile track, or our ‘senior’ runners on the 5k run, there was a lot of cheering and laughter from everybody and we raised over £1500 which was excellent for our first run. We would be delighted if this could now become a part of the annual Alford Christmas festival  bringing a splash of colour and Christmas cheer to many people whilst raising money for an excellent cause.”

Kyle also added “I would like to thank our main sponsor ‘Stewart Milne Homes’ who provided a generous donation that allowed the entry income to go directly into the charity and support the charities main objectives. We are also grateful for the Alford Bistro who provided a donation to cover the medals and to the local Alford Coop for their food donations”.

Results for the Santa Run 5k is available here.

When Sunday 12th December dawned crisp and cold, over 80 ‘Santas’ gathered at the Grampian Transport Museum in Alford to take part in the Athletics…

ATS Trustee Mark Munro highlights the origins of the Trust and why ATS is so important for the future of the sport. He also speaks…