Despite Storm Eunice, there were some spectacular athletic performances ranging from British records both indoors and on the roads to cross country action in Forres and a snowy trail marathon!

There were superb performances at the Emiates Arena throughout many of the events over the 3 day period across all age groups. On the Friday, highlights included Myles Edwards (Aberdeen AAC) landing the 1500m senior gold 7 years since his last indoor title in 3:56.63. Finlay Murray of East Sutherland was second in 3:58.14 and Magnus Tait of Lasswade AC third in 3:59.44.

Records fell at both ends of the age scale as Corey Campbell took down the Scottish Indoor U17 Record at 3000m and Philippa Millage the British W40 mark for 800m. Campbell’s impressive 8:23.94 was also inside the qualifying time of 8:28 asked by British Athletics for the Euro U18s in Israel later this year.

The men’s 3000m saw a number of good performances with Kris Jones of Dundee Hawkhill Harriers and Ryan Thomson of Cambuslang battle for gold. Jones took it by 8:03.92 to 8:04.29 – with that a strong PB for Ryan. The bronze headed to Robbie Ferguson of Kilbarchan AAC.

In the women’s 3000m race, there was gold for visiting Irish athlete, Niamh Kearney, with a sub 9:30 run as Garscube duo Louisa Brown and Lesley Bell joined her on the podium. Lesley’s run of 10:08.94 was a Scottish W45 Best.

It was a very welcome ‘back to business as usual’ for young athletes this weekend, as the 4J Studios Indoor Age Group Championships got underway.

* It was a fine day for Law & District U15 sprinter Tehillah Ikechukwu Okonkwo, who won both the 60m and 200m titles – with a new Championship Best Performance of 25.21 in the latter. Completing the hat-trick of titles for Law & District was  in the U15 Boys 200m with a run of 23.75.

* There was a Championship Best Performance also for Rory Taylor-Young of Giffnock North AC in the U15 Boys 300m, with a run of 37.44. That also gives Rory a Scottish U15 Record (subject to ratification processes).

An honourable mention also to the second-placed athlete in that race, James Clark (VP-Glasgow AC), whose time of 37.79 was also below the previous CBP of 37.82.

The 4J Indoor Season concluded with our second day of the 4J Age Groups taking place on Sunday as another raft of Scottish champions topped the podium.

Among the Scottish champions in that age group were familiar names like Sara Barbour, Molly Reville, Ben Sandilands, Amy Kennedy and Murray Fotheringham.

In the U13s, there was a Championship Best performance from Angus Weir in the long jump competition. The Giffnock North athlete leapt out to 5.38m and that is also a Scottish U13 Record for Angus.

Visiting English athlete, silver medallist Michael Maguire, was also beyond the previous CBP in that long jump competition with 5.20m.

VP-Glasgow youngster Rhuairdh Laing was another to smash the championship records with a 1500m run at 4:40.17. That’s also a new Scottish U13 Record for Rhuairdh. 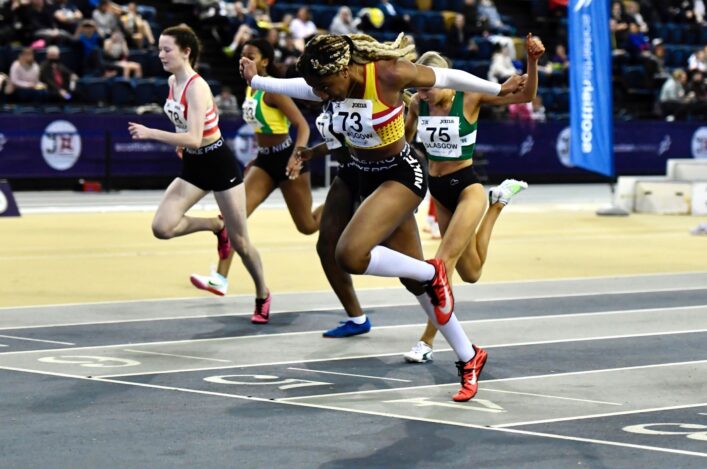 The final North District Cross Country event was held in Forres by host club Forres Harriers in what can be described as an ‘undulating and challenging course’. In the senior men’s event there was a convincing victory for 2:18 marathon runner, Kenny Wilson (Moray Road Runners) in 32:42 ahead of John Newsom (Inverness Harriers) with Kenny’s s clubmate Ewan Davidson 20 seconds back in 3rd place.

In the senior woman’s race, Kirstie Rogan (Highland Hill Runners) stormed to another league win on her home turf in 25:43 in a large margin over Lochaber AC runner Isla MacKay in 27:21. Kirsty’s clubmate and hill runner, Caroline Marwick took the 3rd place in 27:49.

Both Wilson and Rogan also secured the overall league titles.

Despite extensive storm damage, Race Director Christopher Cowley and the volunteers must be commended for making this event happen with the altered route and underfoot conditions. In the senior women’s race, Erin McFadden was a clear winner and was 4th overall and Fife AC’s Ross Christie was a clear winner in the senior men’s category.

The main results are below:

Eilish McColgan finished sixth and clocked a British record of 1:06.26 at Ras Al Khaimah Half Marathon in the United Arab Emirates.

Meanwhile, in the United States, there was Another superb indoor 200m run from Adam Clayton as he becomes the first Scot sub 21 seconds.

This time, Adam clocked 20.86 to improve the time he set a couple of weeks ago (21.07) at the top of the men’s indoor list (subject to ratification process).

It was a day of mixed fortunes for the Scots at the Muller Indoor GP in Birmingham but three performances at least were very impressive in an all-time context.

Erin Wallace posted a World Indoor qualifying time in her 1500m race as she finished fifth. Erin clocked a big indoor PB of 4:08.90 and that is the fourth fastest on the Scottish all-time list.

Guy Learmonth improved his place on the indoor list to second for men’s 800m as he clocked a new PB of 1:46.46 to finish fourth in his race. Guy thus went ahead of Brian Whittle. It was also a World Indoor qualifying time for Guy.

Adam Thomas reached the Men’s 60m final and finished seventh with a run of 6.61 that was within one hundredth of a second of the Scottish Indoor Record held by Nick Smith.

Jenny Selman was involved in a high class Women’s 800m and came up with 2:01.57 for sixth place in a race which saw a British Record run from Keely Hodgkinson.

Combined Events athlete Joel McFarlane came up with a top performance in the United States over the weekend.

Competing at Conference level in Birmingham, Alabama, the GB and Scotland international moved to third on the Scottish all-time list for Men’s indoor heptathlon.

Joel tallied a PB of 5480 points with four event PBs within his sequence on Saturday and then Sunday.

That points figure has only been bettered in the past by current Record holder, Andrew Murphy at 5662, and second-ranked Jamie Quarry at 5640.

The Seville Marathon proved tough for Scottish athletes as they sought to post Commonwealth Games qualifying standards in Spain.

Steph Davis made the top 30 in the Women’s race with a run of 2:37.41. That’s just outside the women’s standard for Team Scotland for Birmingham 2022 but Steph has already achieved that mark.

Jonny Glen of Inverclyde AC was the best-placed of the men at 2:20.57 as he made a solid debut in the event. Sean Chalmers of Inverness Harriers was a bit further back at 2:25.05.

Derek Hawkins was at around 67 minutes at halfway but dropped out around that stage of the race.

The men’s standard for Birmingham 2022 is at 2:15.12 with the window for marathon performances closing on March 6.

If you feel there is anything that we have missed or would like to include in this weekly article, then please let us know by emailing info@athleticstrustscotland.org.uk

ATS is a new charity that has been established with the purpose of supporting the ongoing development of athletics in Scotland through fundraising activities. The charity will help people of all ages and abilities across Scotland to participate, contribute and excel in all aspects of athletics. If you wish to contribute to our mission, please consider supporting the Trust through either fundraising, legacy or a donation here.